Flashback Friday: The Origin of the Baltimore Chop

Flashback Friday has to go way back for this one; specifically, 1894 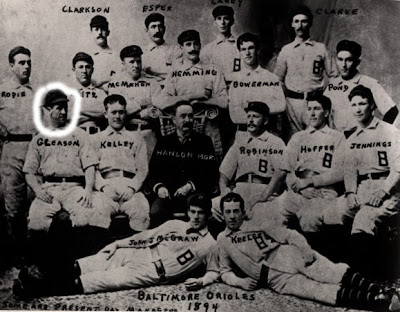 Most discussions of O’s history begin with the St. Louis Browns’ move to Baltimore in 1954, which gave birth to the modern franchise. However, as Orioles Baseball observes, “Since the 1880’s in one league or another there was a team from Baltimore called the Orioles.”

Some 114 years ago, on May 23, 1894, one of the earliest incarnations of the Baltimore Orioles (pictured above) lost to the Brooklyn Bridegrooms, 5-1. Check out the original box score from that game, as seen in The New York Times.

The 1894 team was a rough-and-tumble bunch, known to do anything to get an advantage, fair or otherwise. Thus was the “Baltimore Chop” born. David R. Haus, Jr., of Bowling Green University explains the origin of the phrase:

The National League was concerned about the rough play and actions of its players during the 1890s. Fights broke out between players and umpires, fans and players, and fans and umpires. Players cheated, threw games for money, swore, spit, and much more. The champions of such behavior were the Baltimore Orioles.

The Baltimore Orioles paid off their groundskeepers to hide cement slabs in front of home plate. The resulting high bouncers came to be know as the “Baltimore chops.” Fans used mirrors to reflect sunlight into the eyes of opposing batters and fielders. Fans were also given dead . After a foul ball would go into the stands, the fans would throw back a deadened ball. Players would elbow, trip, punch, and hold base runners, taking advantage of the fact that there was only one umpire. They would cut second base on the way to third if the umpire was not looking. Players would hide baseballs strategically in the tall outfield grass. The Baltimore Orioles would do anything to win whether or not it was legal.

Think today’s rivalries are fierce? Consider the 1894 rivalry between the teams from Baltimore and Boston (information originally drawn from “The People’s Almanac”).

In May, 1894, the legendary John McGraw, then with the Baltimore Orioles, got into a fight with Boston’s third baseman. Soon both teams were battling, and the warfare spread to the stands, which were promptly set on fire. The entire ballpark burned to the ground, along with 170 other Boston buildings. The memories of that incident were so bitter that when the New York Giants–with McGraw managing–won the National League title in 1904, McGraw refused to play in the world Series against the American League champion Boston Braves.

Roar from 34, a Baltimore Orioles Blog. Humor. History. Homerism. Since 2006.
View all posts by Matthew Taylor →
This entry was posted in Flashback Friday. Bookmark the permalink.