Bleacher Report’s Matt King recently posted the article “If Sports Figures Could Have Twittered Through History,” an amusing look at what jocks would have said in 140 words or less had the technology of the time allowed such an opportunity.

King included one imagined Tweet from Cal Ripken Jr., but it’s time to take it a step further and look at what some other Orioles players and managers may have Tweeted during big moments.

@TonytheTiger: Going in as defensive replacement for @BobbyBo. Only six outs to go. Hope the bleacher creatures leave me alone.

@BAAbs: On deck. If @TBat doesn’t get a hit, it’s up to me to extend @IronMan’s career for one more at bat. Anything for a friend.

@Trembo: No more interim tag for me. After 20 years I finally have a chance to run a big league club. Tonight is going to be special.

@Moose35: Just notched 16th win. Winning 20 this season is going to be a breeze.

@CalSr: Start of a new season with @BillyBall and @IronMan by my side. Maybe this is what they mean by #Orioles Magic.

@Davey: American League Manager of the Year! That’ll look great on my resume. 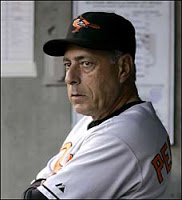 @ThePerl: Great game by @Guts today. Always good to get a win in #Boston. Happy Mother’s Day to all the Oriole moms.

@VoiceoftheOs: #Yankees 6 – #Orioles 4. What a heartbreaking way to end the season, especially for anyone like me who bleeds orange and black.

Have some ideas of your own about what Orioles players might have Tweeted? Post them in the Comments section.