Flashback Friday: A Forgotten Oriole from 1966 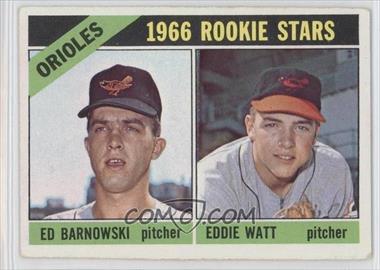 Throughout the 2016 season Roar from 34 will use Flashback Fridays to remember the 1966 Baltimore Orioles and honor the 50th anniversary of the franchise’s first World Series title.

Having discussed the Orioles’ acquisition of Frank Robinson and then the gambling preferences of Frank Sinatra and Dean Martin, our journey through the 1966 Baltimore Orioles season this week focuses on a lesser known (if not altogether unknown) name from that season. Meet Ed Barnowski.

I enjoy Orioles history. I particularly revel in the obscure and the overlooked. That preference led me to review the roster of the 1966 Orioles and find the guy who played the least. That was Barnowski, who at age 22 made two relief appearances for the O’s.

Barnowski allowed four hits and one earned run with two strikeouts and one walk in three innings of work. Combined with the four innings he pitched the season prior, Barnowski totaled six innings in the bigs during his career. His story includes plenty of exposition.

So what happened to Barnowski, whose scouting report read “Can throw real good fastball and curve. Is hard worker–an A-1 prospect”?  With the 1966 season serving as the climax of his baseball career, what’s the denouement?

Do a little research and you’ll primarily see mentions of Barnowski’s control problems in the minors post-1966 and perhaps a mention to his military service, which interrupted his minor league season in ’67 but didn’t remove him from the game for long.

Surprisingly, there are few mentions of the shoulder injury that ended Barnowski’s career prematurely at age 27.

From The Daily Gazette

“At that time, pitchers with shoulder problems just didn’t come back. It would have taken me too long to recover, if I ever did,” he said. “I had gotten my masters degree and was teaching in Guilderland, making $11,000 a year. I was only making $7,000 playing for the Orioles. That was the era before free agency, and you just didn’t make that much money.”

The Richmond Braves certainly thought they were on to something when they signed the 24-year-old Barnowski in June 1968, with the Associated Press reporting that he could be a “change of scenery” guy.

Richmond’s International League champions may have mined a bit of pitching gold when they acquired right-hander Ed Barnowski last week from the Rochester Red Wings.

Two years ago, Barnowski was a 17-game winer for the Wings, but last year he slumped to 4-7. He owned a dismal 0-3 record when Rochester decided to let him go this season.

Richmond obtained him with the thought that, at 24, Barnowski still had many a productive pitching year ahead – and that maybe he’d benefit from a change of scenery. First returns make this guess look good.

He later served in various roles for Rochester including director of sales and promotions, assistant general manager, and general manager. Afterwards, he left baseball and became a Yellow Pages salesman.

“It took me a little while to get over the shoulder injury, but I still have great memories of my pro career,” Barnowski said. “It was fun all the way.”

Roar from 34, a Baltimore Orioles Blog. Humor. History. Homerism. Since 2006.
View all posts by Matthew Taylor →
This entry was posted in Flashback Friday and tagged 50th Anniversary of 1966 Orioles. Bookmark the permalink.