It’s unique to enter a baseball season so certain of a team’s ineptitude. If you’ve been a Baltimore Orioles fan for any amount of time, you know what it’s like to brace yourself for losing at Camden Yards and beyond. But even amidst the many dark days of Orioles seasons past, we fans held onto a sliver of hope. 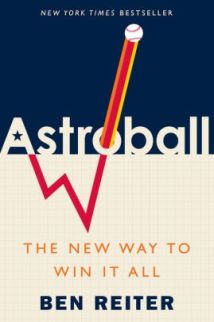 The team will celebrate the 30th anniversary of “Why Not?” in August. “Why Not?” was originally an incomplete sentence, as in “Why Not Us?” These days, it’s a death sentence.

There are many reasons why not, so many in fact that the oddsmakers are setting all-time low win totals for the O’s, which leads to fun headlines like this: “There are a few (crazy) people placing wagers on the Orioles to win the World Series in 2019.”

Well, for what it’s worth, Seal did warn us that we’re never going to survive unless we are a little crazy.

We’re entering the wilderness of the Orioles’ rebuild in the hopes of ultimately reaching baseball’s promised land. If you’re a part of that journey (and if you’re reading this, you surely must be), I ask, “What’s in your 2019 Baltimore Orioles survival kit?”

Here’s what’s in mine:

A copy of Astroball: The New Way to Win it All.

Did you know that you’re not allowed to name new Orioles Vice President and Assistant General Manager Sig Mejdal without including a mention of either NASA or rocket scientist? Dems da rules. Just look here, here, and here.

Sig the Science Kid gets a nod in the Astroball book blurb. Meanwhile, the author himself described new O’s Executive Vice President and General Manager Mike Elias as “the ideal person to take over this job”.

So we read, we trust, and we dream.

Baseball isn’t rocket science … or is it? We’ll find out over time. For now, Astroball gets tossed into the ol’ survival kit to help build endurance for the long, slow, distance of the O’s marathon run toward relevance.

Natty Boh … and Lots of It

Okay, it’s no longer brewed in Baltimore. It’s a corporation cynically marketing nostalgia to the locals. We should all be drinking craft beer and growing beards. I get it.

The bottom line is we’re going to need beer to get through this season. Lots of it. It may as well be cheap.

Ain’t the Beer Cold? Maybe in a few years. For now, pass the corporate crap and celebrate another day in the Loss Column. There’s room in the survival kit for some Boh.

That’s right, I’m stuffing Baltimore’s giant costumed bird into my survival kit, and not just because I want some alliteration in this blog post (books, beer, Bird, blog … I could do this all day).

I’m riding with the Oriole Bird this season because he reminds me of being a kid at the ballpark. Those childhood experiences made me the type of fan who’s willing to follow a miserable baseball team.

Plus, if there’s any chance of turning my kids into O’s fans, I’m going to need that beloved mascot’s help. The results on the field sure ain’t gonna win any converts.

So there’s my list. Now it’s your turn. What’s in your 2019 Baltimore Orioles Survival Kit?