What are the Unwritten Rules for Booing Baseball Players? 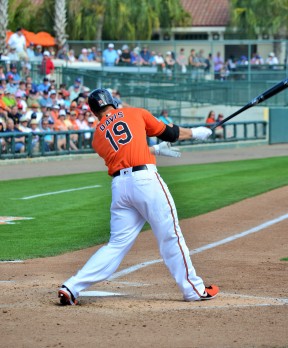 Baltimore Orioles human Rorschach test Chris Davis got booed multiple times on Opening Day at Oriole Park at Camden Yards. You know how the saying goes: “Boo me once, shame on you. Boo me twice, shame on me.”

Actually, I made that saying up. It’s like an unwritten rule of baseball. Repeat it enough, it catches on, and before long people are saying it without really thinking about whether it makes sense in the first place.

There are certain fan behaviors that visitors to Camden Yards who don’t wear pinstripes or pink hats can agree are beyond the pale of appropriate Birdland decorum: Don’t curse in front of kids, don’t push the mascot off the outfield wall (it happened), and don’t be the guy who tries to start the wave in your section.

Okay, so some of those are actually really good. (@MikeyGilz, I’m looking in your direction.)

Yes, the rules of booing are exactly like baseball’s unwritten rules. Unclear. Subjective. Debatable. And largely affected by which uniform you support.

So here are a few unwritten rules of fan booing as I understand them: