Boh at the Ballpark 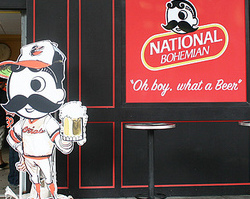 There are those who would criticize Baltimore’s affection for its “local” beer, Natty Boh. That passion was displayed fervently last week when a rumor surfaced that the beloved brew would no longer be sold at Camden Yards. But affection can breed antagonism.

The contrarians among us include Baltimore Sun columnist Peter Schmuck, who summed up the adversarial perspective in his column “What is it with you people and Natty Boh?”

Can someone explain to this transplanted Marylander what the big fuss is about National Bohemian Beer?

I mean, it’s one thing for Baltimore to be a provincial town that treasures anything from or about Charm City, but it’s not even good beer and — news alert — it hasn’t been brewed in Baltimore since 1996.

In summation: it’s no longer local, and there are better options available.

There was a time when Natty Boh and the Orioles were synonymous in word and deed (for more on that, read Pete Kerzel’s 2011 column, “Welcome Home, Natty Boh!“). Eventually, the relationship became symbolic, just as our relationship to our “hometown” team is symbolic. You don’t hear many calls for people to abandon their local sports loyalties.

Natty Boh and the Orioles are acquired tastes associated with our Baltimore birthright. You don’t have to be from the local area to like them, but the odds are better that you will if you are.

3 Responses to Boh at the Ballpark